The Multi-sensing Intelligent Robotic Assistant (MAiRA) is the new cognitive cobot from German-based NEURA robotics. It delivers previously unseen features for cobots that will push them towards the goal of making them smarter, more user-friendly, and autonomous. moving them beyond industrial applications and into homes, healthcare, retail, and office spaces and advanced AI of MAiRA serves as an example of what the new generation of personal-use cobots are capable of. 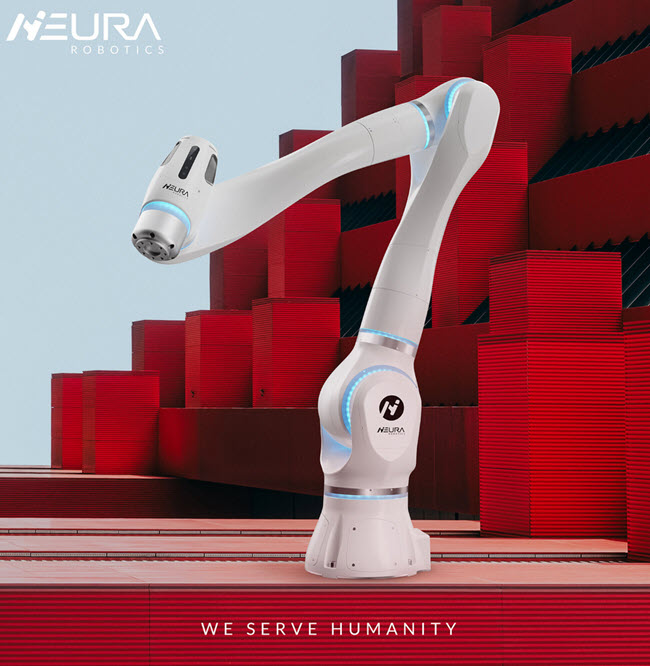 More than 'just another cobot'

“We're not just building another collaborative cobot, we're taking it one step further, to a cognitive and interactive robot, says CEO of Neura Robotics, who previously built up the robotics division of the Swiss company Mabi AG. Neura Robotics GmbH is the new company name and brand of the former Han's Robot Germany GmbH, a robotics start-up founded at the beginning of 2019. The headquarters are in Metzingen, where business administration and software and sensor development take place, while the hardware innovations come from the Hamburg site. The new Cobot Maira (Multi-sensing Intelligent Robotic Assistant) is a completely new development made in Germany and not just a further development of the already existing Cobot Elfin from Han's Robot, emphasises CEO. What makes Maira stand out? “The robot is not only collaborative and easy to operate, but cognitive and adaptive and can interact safely and naturally with humans," says CEO. This is because the Cobot Maira can see, hear and feel its surroundings, he adds. 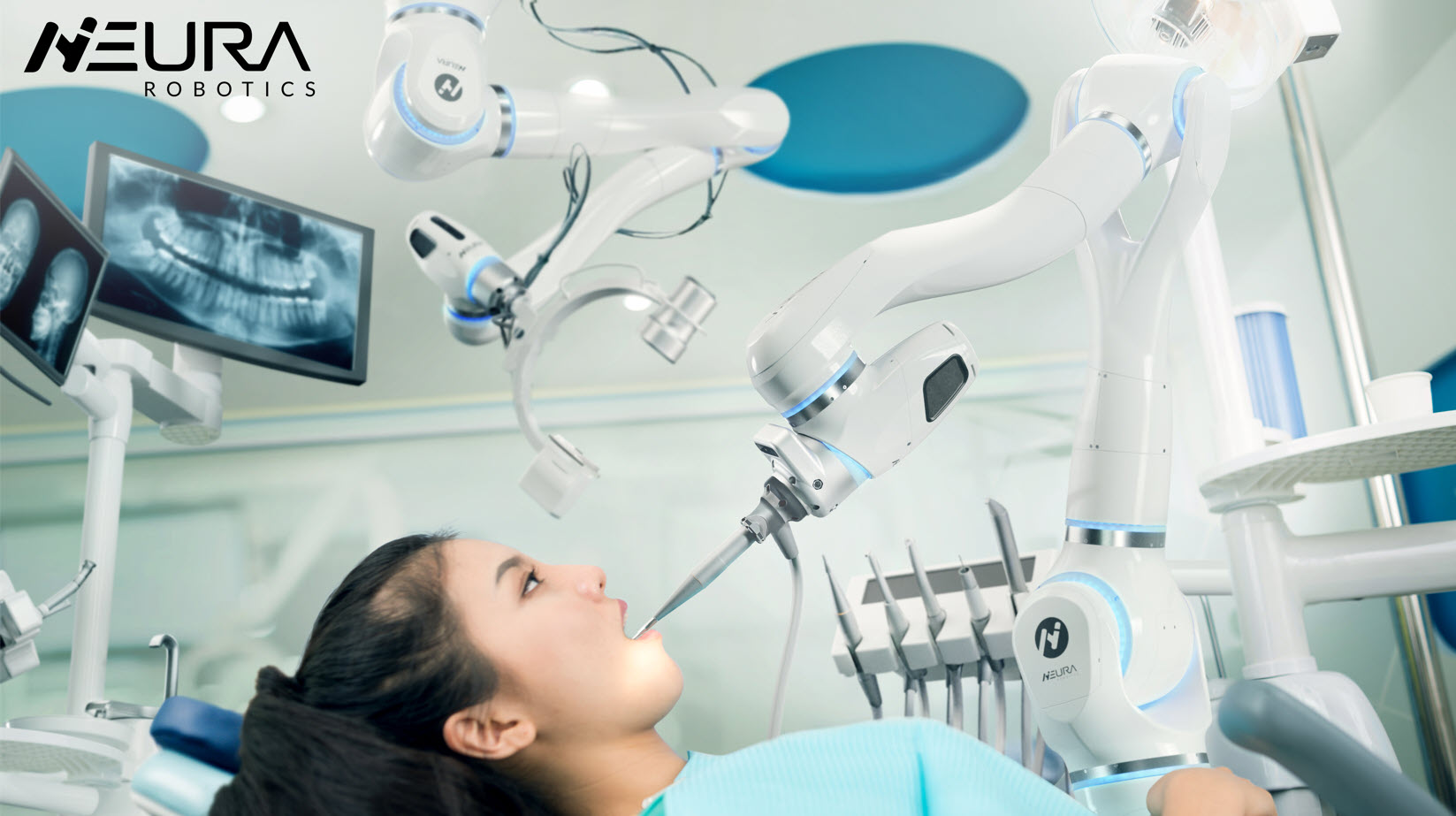 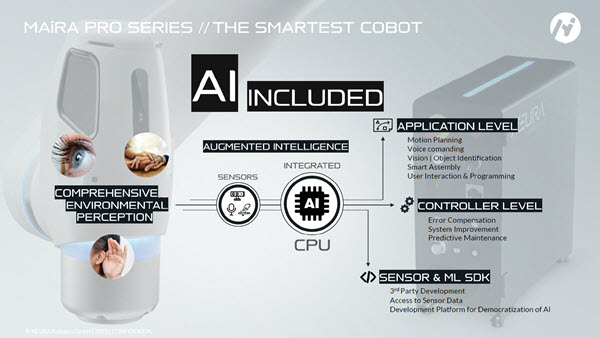 This Robot can recognizes people

This is ensured by an integrated 3D vision sensor and a 3D speech recognition for voice commands as well as a non-contact recognition of people in the vicinity. The special feature is that no external sensor technology is needed for these functionalities. Neura-Robotics does not want to reveal exactly how this “Touchless Safe Human Detection" works. But it is probably a different sensor technology than capacitive sensors or 3D vision. However, the sensor technology helps to detect the presence of humans in the workspace and then stop the cobot or, thanks to integrated AI software, to re-plan the robot's path in such a way that it does not collide with humans. Other highlights of the smart Maira cobot with a payload of 6 kg to 18 kg include simple smartphone-like app-based operation. Furthermore, an artificial skin and force sensors are used, with which the cobot can be programmed via manual guidance. Another special feature is the Cobot's IP65 protection class.

With our MAiRA, however, it is now possible to use robots in medical applications due to both the very high accuracy and the collaborative capabilities. We are talking to customers who want to use our robots as surgical robots, massage robots but also for breast cancer screening. Furthermore, there is great interest from a wide range of industries, such as agriculture, gastronomy, but also creative areas such as artists and museums. We basically don't exclude any industries and want to show that the limits of robotics are only limited by the creativity of the users and no longer by the performance and usability of the systems. In the long term, I therefore see greater potential for robotics in social areas, although at the moment its use in traditional industries still predominates

NEURA Robotics has the mission to finally close the gap between robots and humans and thus make robots accessible to everyone.

Cobots with brains are ready to do the dishes and take care of you when you age
Collaborative robots with cognitive function can augment our lives and fill the gap in aged care. 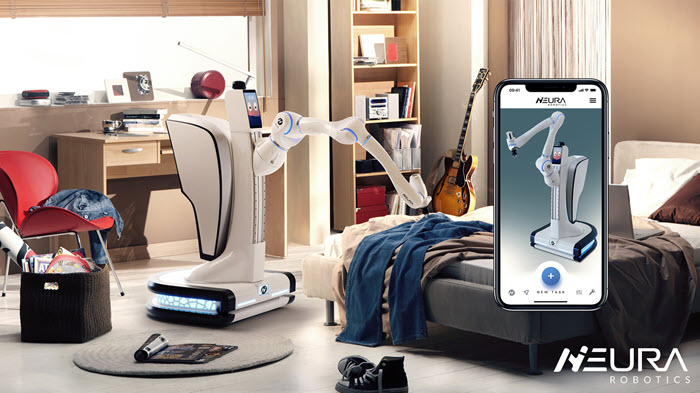 Unless you are a robotics engineer, the idea of programming your personal robot may be a bit daunting. However, MAiRA can be programmed in a number of ‘low-code’ methods including via a smartphone-like app, as well as through gestures. Additionally, the robot can be directed using voice commands. This is a particularly important feature for users with mobility issues who need to direct the cobot to undertake tasks from a stationary position. 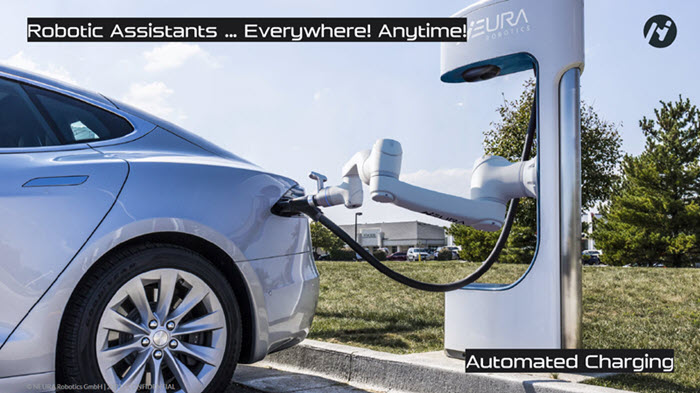 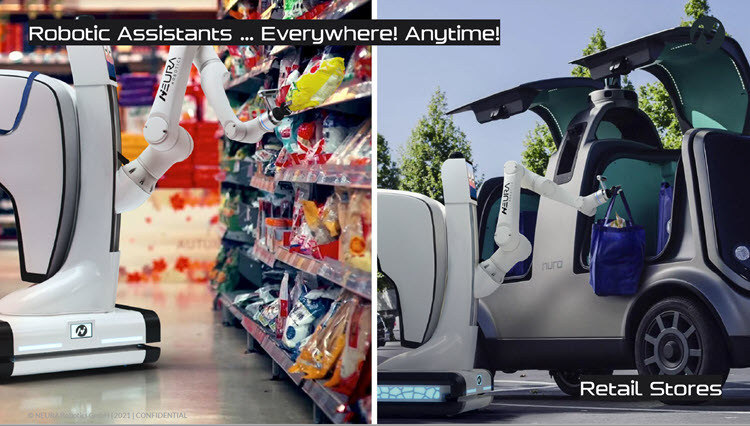 Last but not least, Neura-Robotics presented the new MAiRA robot, which is available in versions with six or seven axes. Three different sizes are available: S (18kg/1m), M (15kg/1.4m) and L (11kg payload/1.6m reach). In addition to the IP65 protection class, the kinematics have a high degree of rigidity. In addition, all cables and media are routed internally to avoid sources of interference during application execution – among them are three connections for air as well as the Ethercat, Modbus, Can, IO Link and GpiO interfaces. MAiRA offers a maximum speed of 4.5m/s. The robot has individually programmable status LEDs on each axis. The repeatability is up to ±0.01mm. “But what is really unique is the special sensor technology built into the head, as well as the Safe Human Detection", explained the CEO. This is because not only the force sensor and a touch control panel have been integrated here, but also a force-sensitive skin, a 3D microphone array for speech recognition and, optio¬nally, a 3D vision camera. 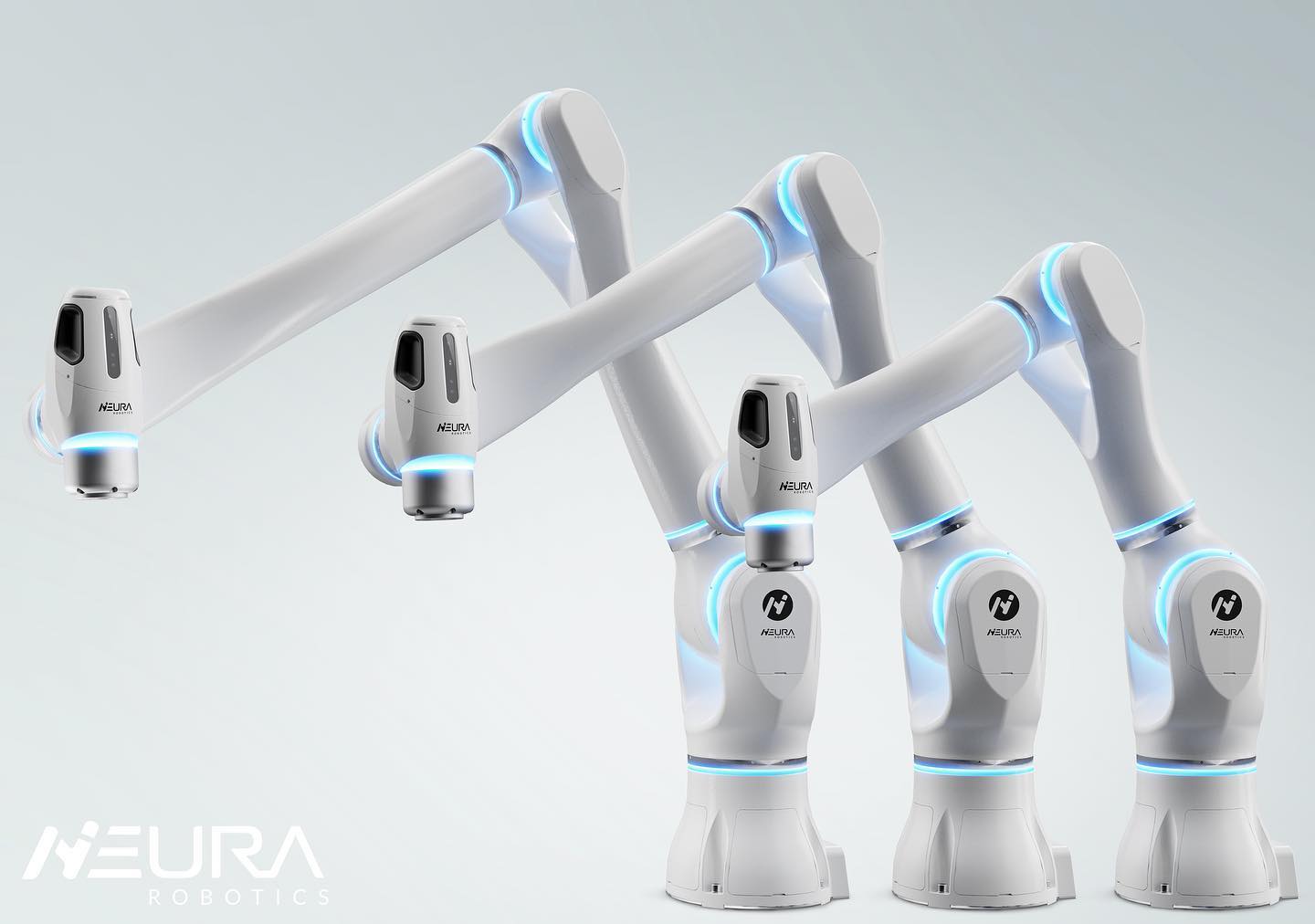 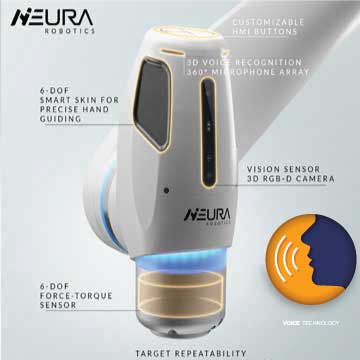 This allows completely new ways of programming: in addition to HMI or freehand guidance, MAiRA can also be controlled by voice command or gestures. A record function allows teaching by hand to be recorded. This also applies to the force applied, because MAiRA has a self-developed 6-DoF force-torque sensor in the robot flange. Via a 3D voice sensor, the cobot responds to voice commands and also answers the operator to enable collaboration that is natural for humans. There are several touch buttons and a touch skin for programming linear movements. On the Graphical User Interface, trajectories can be created by drag & drop and all movements can be simulated in advance using the robot's Digital Twin. In any case, the manufacturer promises uncomplicated commissioning through the intuitive user interface, without the need for expert knowledge. In parallel, various programming languages can also be used, e.g. ROS and Python. The open software architecture allows advanced users to intervene deeply in the system and thus facilitates the development of their own applications. Enriched with smart algorithms, the robot allows functions such as automatic object recognition or identification, or picking known and unknown objects. Furthermore, it is capable of mapping the environment, which generates a digital image of the environment and the objects located there.

NEURA Robotics has not only developed its own motor concept and encoder design for its cognitive cobot, but also the safety concept of Safe Human Detection with which certification according to KAT3/SIL3/Pld is aimed for. According to the manufacturer, the cobot recognises a nearby human, regardless of which part of the robot it approaches. In addition, MAiRA is also able to ensure that the tool clamped in the end effector keeps the necessary safe distance from the human operator, regardless of which tool it is, in which application and under which environmental influences the cobot is used. 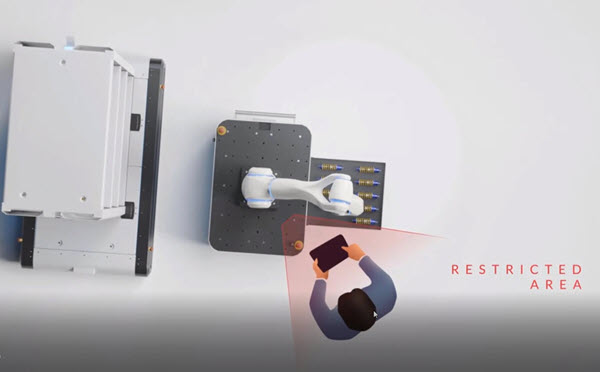 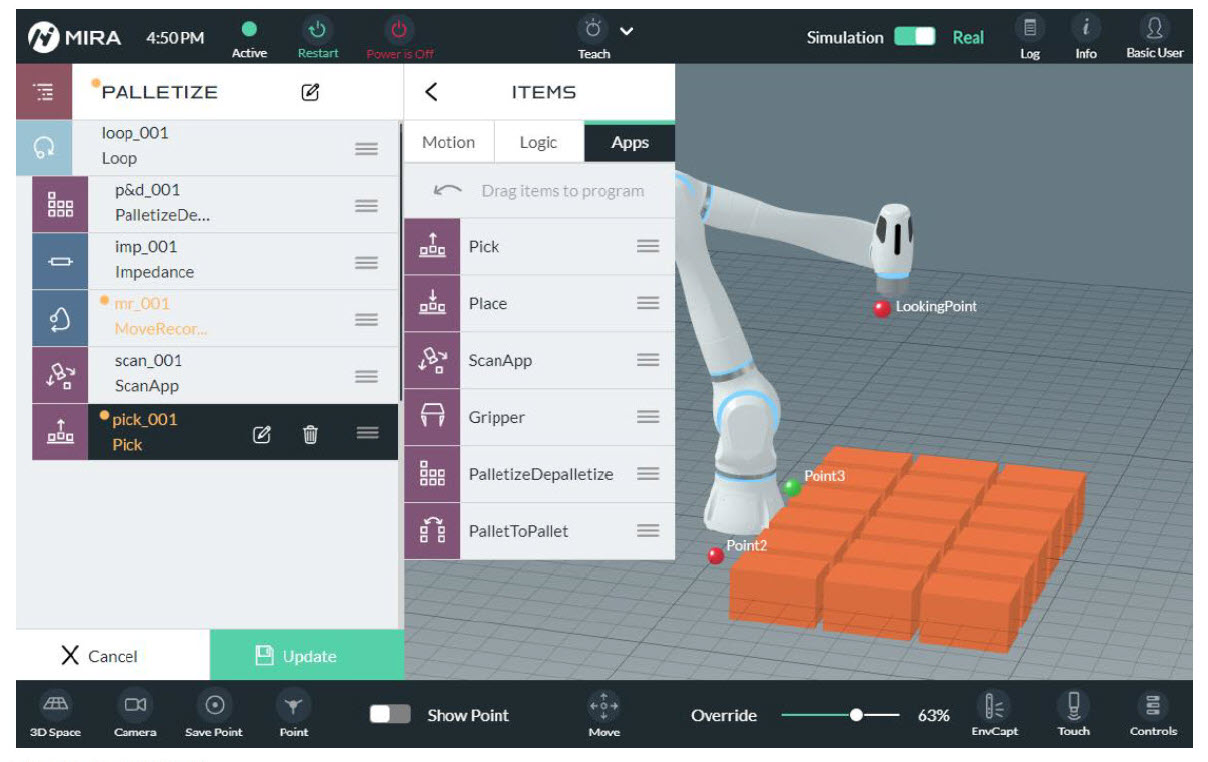 The robust and rigid design combines the performance (speed, accuracy) of a high-end machine with simple drag-and-drop programming, lead-through programming, voice and gesture control, opening up endless possibilities for interaction: for novices and experts alike.

MAiRA's ability to fully perceive the environment, as it can feel, hear and see, combined with its ability to quickly adapt to a changing setup, creates an error-free and completely safe system that can be integrated not only into the classic industrial setup, but also into environments where accuracy, repeatability and safety are the most critical elements. These include, for example, healthcare, agriculture, food processing, our personal homes and many other potential deployment environments. 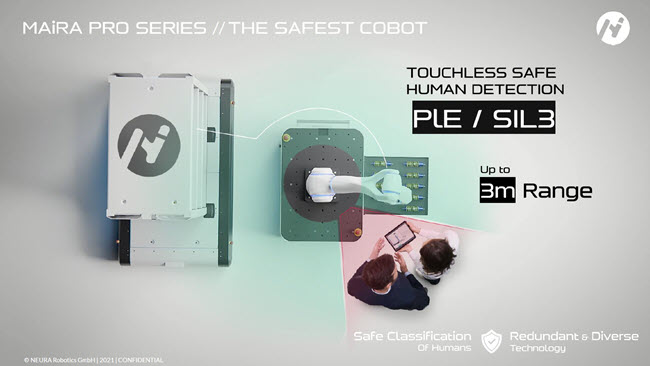 Natural and safe human-robot collaboration, which is a key enabler in the world of robotics, is possible thanks to the specially developed and deeply integrated human detection sensor. MAiRA not only switches to a slower working mode when a person is within the robot's working radius or stops completely when the human is too close (as is the case with conventional safety scanners), but trajectory re-planning takes place, seamlessly resuming the programme with maximum productivity and safety when the person is at a safe distance.

In addition, MAV (Multisensing Autonomous Vehicle) mobile robot, which also uses Maira technologies such as 3D sensor technology and contactless Safe Human Detection. The mobile transport robot can also be used in fleets and becomes a mobile manipulator with a MAiRA-Cobot mounted on it, which expands the range of application scenarios enormously." For this purpose, MAV can be equipped with a vertical linear axis for the cobot. In addition, a shelf has been developed for the mobile robot, which is suitable for depositing components and small containers.

By means of integrated sensors, the mobile robot can move autonomously and safely in the area of operation after mapping the surroundings. MAV scores with simple commissioning and operation. “Because MAV is equipped with integrated 3D cameras, 3D microphone arrays and a human detection sensor, the mobile robot can not only react to its environment, but also interact with humans in a natural way.The integrated gesture and voice control allows workers without robotics experience to easily and naturally interact with and programme the robot.

Voice commands such as “Move forward 10cm", “Store this point", “Activate lifting unit" make it easy to teach any process. Commissioning can be completed in just a few hours thanks to the intuitive Start-Up Wizard.

Thanks to Cruise Control, several MAVs can be integrated and controlled in the production flow in a fleet management system. With a payload of 1,500kg, MAV is particularly targeted at the transport of heavy goods in the automotive industry or in logistics. The system dimensions make it easy to accommodate pallets. With a running time of up to 10 hours combined with a charging time of only 60 minutes at an inductive charging station, a continuous flow of goods can already be ensured with just a few systems. 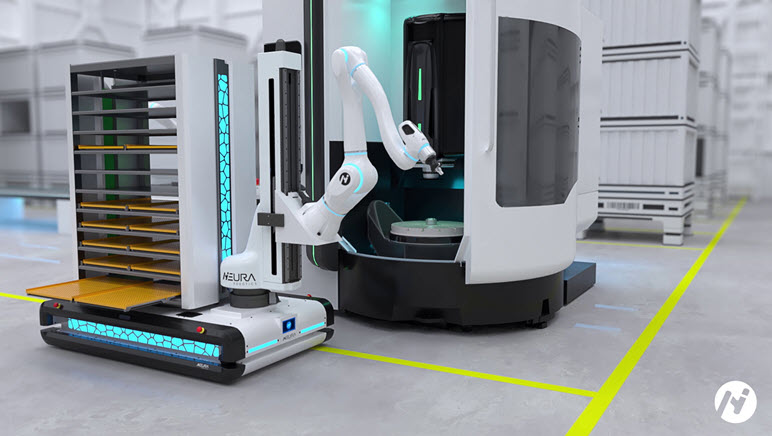